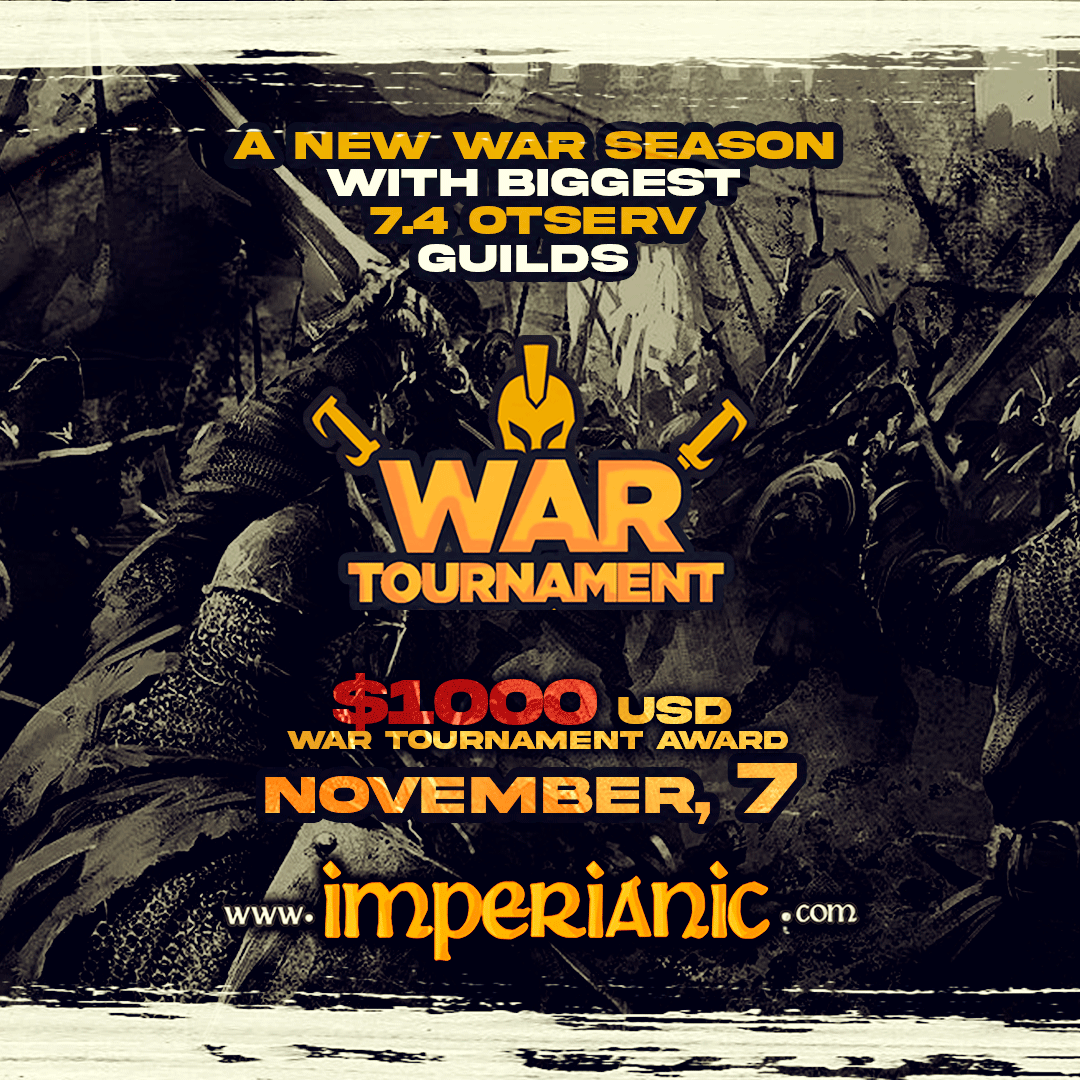 1. Guilds on Imperianic are for PVP-only players who wants to participate in the new Guild Warfare Tournament, so if that's not your idea, don't join a guild;


2. The first tournament will begin November 28, at server save and will end on December 5, at default server save. The prize will be $400 USD sent to guild leader by Paypal or Tibia Coins;


3. The second tournament will begin at December 8, at server save and will end on December 15, at default server save. The prize will be $600 paid to guild leader by Paypal or Tibia Coins;


4. The guilds must have minimum of 20 players to participate, and maximum 50 players, including invitations. If we do not reach the minimum of 2 (two) registered guilds with minimum members, tournament wont start and prize will not be paid;


5. Each player can only join a single guild once, and if they do and leave, or get kicked out, they will be out of the system until the end of the tournament.


6. By joining a guild, you will automatically be at war with all other existing guilds, and this is demonstrated in game by the guild emblems next to your player, green for allies, red for enemies and gray for those without guilds (not in the system).


7. 24 hours before tournament start, all guilds and guild points will be reseted, and will be opened new guilds registration;


8. Only players with level 50 will be allowed to participate integrating a guild on registration;


9. The tournament scoring system will work in two ways: with increasing and decreasing points;


10. The first way to increase will be when the player raises a level, in order to dominate the server, where the new level will be divided by 3 and will be added as a guild point. Example: You level up from level 99 to 100, your guild will earn 33 points;


11. The second way to raise will be by killing players from another guild, where the dead player's level will be multiplied by 2 and added as points in the guild if he is killed (last damage) by someone in his guild. Example: Your guild killed a level 100 enemy, you will earn 200 points;


13. At the end of tournament, the guild with most war points will win;


14. Any violation that brings advantage to a guild, whether for selling death or any other abuse, will end in declassification to guilds involved, according to criteria set by the Imperianic team.


15. YOUR ACCOUNT IS YOUR REPONSABILITY, so don't use same password of other servers because hacking may decrease your guild points and we will punish the same way;


16. Invites will be counted as guild members, since you are able to join a guild after tournament started if you were invited before start;


17. Every single points movimentation will be logged by in our server for analysis.